On Feb. 11th, we lost a wonderful friend, colleague and mentor. David Shover, Karin’s Florist beloved General Manager, lost his battle with cancer. He had a passion for the floral industry and was AIFD (American Institute of Floral Designers), President Elect.

This is what the American Institute of Floral Designers had to say about David: 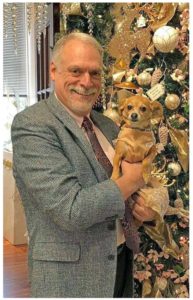 “David Shover AIFD National President Elect and AIFD member since 1989, was an award winning designer, educator, leader, mentor and friend to so many. His dedication to the AIFD National Association, Southern Chapter and Foundation is a list that expands into pages, not paragraphs. As a designer – one of the best, as a teacher – thorough and encouraging, as a leader – easy to follow, as a mentor – inspiring to the end and as a friend – missed every day.

David’s belief in looking at each day as a gift was reinforced with how easily he would share that broad smile and roaring laugh. His design knowledge and love of the industry will live on in all of those who had the good fortune to know him and share the short moment in time he was able to give to each of us.”

David was one of those rare people who was extraordinarily creative but also had the business mind, making him the perfect General Manager. He brought a different perspective to every subject and was open to new suggestions.

When David joined the Karin’s Florist family, I’m sure he didn’t expect to be able to name all the Disney princesses after we started carrying the Disney line.  One day he called Maris (the President of Karin’s Florist)  and was very proud as he said “You wrote that Ariel is a princess and she is not!”  When Maris answered, “you mean daughter of King Triton and wife of Prince Eric?”, …… he said “I’m not talking to you anymore” and hung up.  You could just see him shaking his head, rolling his eyes a bit and smiling with that twinkle in his eye.

We will always remember his kindness, sense of humor, laugh and smile, and incredible talent. We will miss him always but know that he will be looking after us. And of course, we promised David that we would all take care of his adorable dog, Lexi. We promise to love her and always take great care of her. Rest in peace my friend. We love you and will miss you greatly.