We had so much fun making the Rudy video that we had to tell you the story about how it all came about. Now keep in mind that this is not a trained TV dog, it’s just our nephew’s dog who will lose his mind over his special orange ball. One day after a game of fetch, we put his ball on the counter at home. Rudy started jumping up and down trying to see the ball (like in the Rudy video.) He did this non-stop for several minutes. We couldn’t stop laughing.

So when we decided to make a video with a dog shopping at Karin’s Florist, it had to be with Rudy. We had a ruff idea, (see what I did there?!), about the story line, so we got the dog and his parents and went to Karin’s Florist for the shoot. 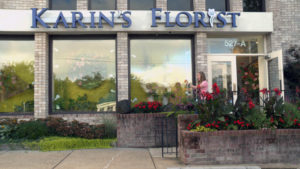 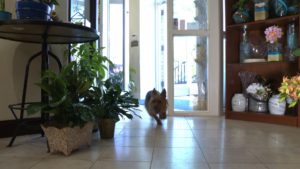 To get Rudy to run inside, we had his Mom show him the ball and go inside. We would start recording and let Rudy go and he ran as fast as he could to find the ball. We did that a few times from different angles and each time he hit his mark like a pro.

We then we moved the camera inside and did it again from various angles. Rudy was perfect every time. 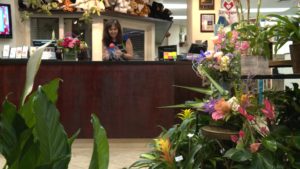 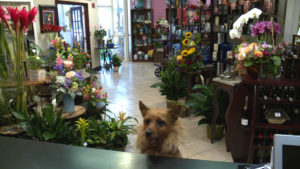 Now it was time for Rudy’s famous jumping dog routine. All we had to do was show him the ball and Rudy did the rest.

The video shoot took just over two hours and just over half way, Rudy was starting to get a little tired of all this work without getting his ball. 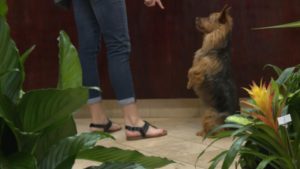 He couldn’t figure out what he was doing wrong so he decided to run thru the inventory of all his tricks so he could get his ball!

To get Rudy to “smell the flowers,” we showed him the ball being placed behind the flowers.  While he was moved to his mark, we removed the ball. It worked perfectly and it really looked like he was smelling the flowers.

The only thing Rudy did wrong, as an actor, was he looked at the camera in one scene. And since that was the best take of the scene, we decided to use it in the final video.

Now that all the scenes were shot, we needed something to tie it all together. We found this great animation template of a dog watching TV and got the idea of making it a TV show. The Rudy Show! But Rudy needed a voice. Fortunately, our niece talks for her dog ALL THE TIME in what is now the Rudy voice. She watched the video over and over and each time recorded whatever she felt the dog would say. We took the best of each take and edited the final video to make what you saw as The Rudy Show.

We hope you liked watching it as much as we enjoyed making it for you. 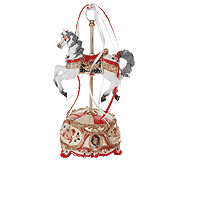